Why these 10 booths caught our eye at Sydney Contemporary

Gina Fairley, ArtsHub, September 8, 2022
Open a larger version of the following image in a popup:
Share
With VIP previews held Wednesday, 7 September, Sydney Contemporary is off and running after a two year hiatus of in-person events. Sydney Contemporary Founder, Tim Etchells told gathered media: ‘The sixth edition of Sydney Contemporary promises to be our strongest Fair yet… we’re predicting that sales should be very strong.’ He continued: ‘The Fair provides the most concentrated level of sales in Australasia in the calendar year.’ In 2019, sales reached $18 million, while online versions in 2020 ($1.5-1.8M) and 2021 ($4.5M) offered a lifeline to many artists. Barry Keldoulis, Director of Sydney Contemporary, said many think of it as ‘the artists’ Christmas’.
He continued that while many galleries continued to do well during the pandemic, it was more difficult for emerging artists, who don’t have that gallery network to pull on for support, or the weight that an established name can have in attracting sales online.
Etchells – whose conglomerate owns fairs in Taipei, Hong Kong, Singapore and Tokyo – said that the success of Barcelona art fair last week – ‘one of the strongest players for many years [in the fair landscape] – signaled a sector return.
What I can tell you is that as the fairs have been coming back; they’re strong.Tim Etchells, Founder Sydney Contemporary
While sales are one gauge, Etchells said another is its ‘dwell time’ – the length people stay in the venue, engaging. ‘We have noticed as well, the time people dwell here [at Carriageworks in Sydney Contemporary] is much longer than other venue that we run.’
So what are the booths that bolster that dwell time at this event? 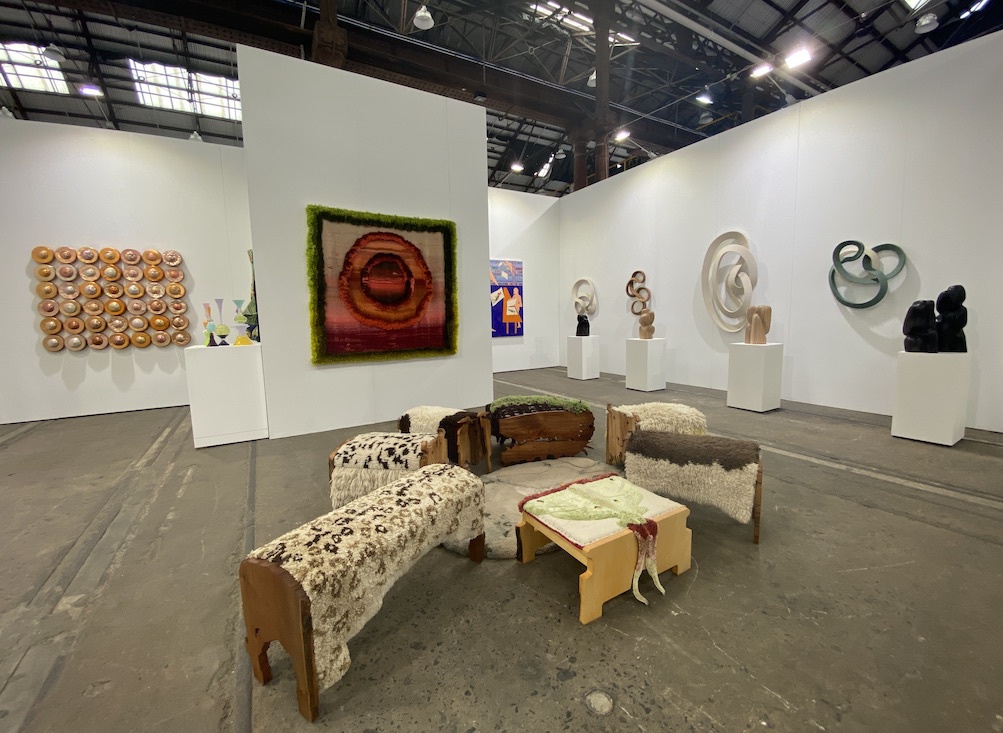 Gallery Sally Dan-Cuthbert at Sydney Contemporary 2022. Photo ArtsHub
Gallery Sally Dan-Cuthbert: for nailing the mixed booth approach
One of the choices gallerists face preparing for a fair is whether to do a solo exhibition or a mixed booth of artists. Solos don’t give all artists a fair go but are a cleaner hang, while mixed booths can look like ‘a dogs breakfast’ (and there are some cracker examples of that at this year’s Sydney Contemporary).
Gallery Sally Dan-Cuthbert, in contrast, shows how to do it well. Their booth is an incredibly diverse mix from the meticulous woven paper works of Abdullah M.I. Syed, to Donna Marcus anodised cookware installations and Edward Waring’s glass Memory Sticks, to the stunning pairing of Olive Gill-Hille with Ivana Taylor’s loopy wall pieces. The gallery said: ‘The presentation will seek to champion a return to process and technique, amidst the unrelenting pace of the technological present.’  Not better example of that is Syed’s work – which is truly a stand out at this year’s fair.
Booth F16